Posted by Erika on September 01, 2013
Here's part 2 and 3 of Leaf's M! Countdown: What's Up L.A. concert fan account.  Check out part 1 here.  This fan account has been cross posted from Leaf's blog, My Kpop Obsession.  Please be sure to take out with full credit. 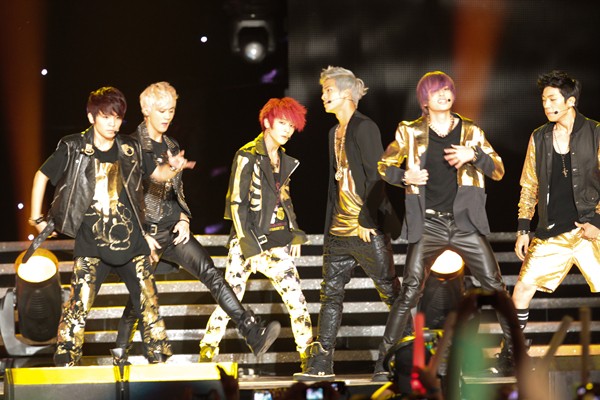 Teen Top got the whole audience grooving again after the mellow Yu Seung Woo segment. Leading in with a dramatic, yet somewhat awkward and unrelated to anything else banner-drop, they debuted their new tune, Rocking -- I don't care for the track much, but the dancing was really impressive. These boys are quite nimble and light on their feet, defying laws of speed and gravity. (srsly someone needs to make a gif of their flying legs!) I was only familiar with Miss Right before this, but their whole set was fun and the way they addressed the audience was really sweet -- and you could tell they were working their butts off for the crowd. They haven't impressed me enough to turn all Angel (their music isn't seducing me) -- but Shinhwa should be proud of their boys -- they presented themselves well!

SM Entertainment's Dozen of Live-Action Anime Characters/Super Junior 2.0 were quite impressive live - even if you couldn't hear a damn thing they sang or spoke because of the constant bombardment of euphoric fangirl screamage... (again, thank goodness for earplugs!)

The opening was very theatrical -- animated projections leading into each character's appearance (see Wolf link above, and this one where Kai appeared in the crowd!) and then lead right into the first song, Wolf, which further set the crowd on fire -- I had an almost perfect center-stage view (in the nose bleeds) and had a great view of the crazy tree choreography, that was pretty cool. Growl was tight and polished and you can't help but marvel at all TWELVE of them maneuvering about on stage without collision or injury! The super pop-y 365 was un-staged -- they just bounced around and sang -- it was casual and fun. A good note to go out on. And the crowd sang along to everything.

On the whole, EXO had a great give and take with the audience. Fangirls would have loved them no matter the quality of their performance -- but I can honestly say, it looks like they do deserve all the love they get. The kids put on a good show! I'm not going full-EXOTIC (I am a little too old for these boys -- but I totally understand the appeal. SM is an evil genius. But if I had to pick a bias, I think I might go with Kris...)


Part 3
Once more, with feeling, Internet!

Set: One of a Kind - MichiGo - Crayon - Niliria ft. Missy Elliott (above)

Well, I didn't cry or come down with a case of The Fangirls, as I feared I might -- so I left KCON with some self-respect still intact! But part of me wishes GD's stage would have been mind-blowing enough to make me weep. Alas, 'twas not the case.

It was really really cool to see him live, (rising above the stage with the Coup d'etat Shake the World teaser blasting was pretty badass!) and to get see the collaboration track before it's even been released -- that's pretty special! -- but his set list and stage performance were exactly what I was expecting - no surprises there. Also, the poor boy just looks so tired on stage lately -- hunched and bowed, hiding behind sunglasses -- and he plays his performance close on stage.


If you stalk LAX arrival footage and the kcon fan meet,
his body language screams don't want to be here
and/or really needs a nap.

So, although the crowd was going nuts, I can't say that his performance actually filled the stadium -- it was very much local to the stage and floor of the venue (where as you watch concert footage of PSY or CL -- or, again, Dynamic Duo just a few sets earlier -- you can see how they push themselves out into the crowd with their energy).  So, to me, up in the nose bleeds, the performance was not an amazing live experience, worthy of tears and apoplexy.

My biggest complaint about GD live performances is how much he doesn't actually sing -- he's so busy with choreography, and probably bored to death singing the same three songs over and over for the last six-months to a year, that he drops in and out of the vocals -- and seemingly, without much attention to how that effects the delivery of the songs. He consistently fails to sustain some of the best phrases in his songs, and he doesn't to bring his full magic/charisma to the stage.


I would love to see him sit still
and actually sing his heart out, just once.
(the Inkigayo performance of That XX almost counts,
but he looks so bored and his vocals
don't have the power or intimacy of the studio recording...)


However, I went back and watched the GD section of the official M! Countdown What's Up LA broadcast (GD's set starts around 75 min, and Niliria is at 88 min) and got a new appreciation for his KCON performance -- and was validated in my theory that GD is really a camera performer, at this point.

The Mnet cameras captured a lot of subtlety in his stages that didn't carry out beyond the ground level audience, and the recording of the performance had a lot more energy and charisma -- also, the audio was 30 bajillion times better because they recorded through the mics, so you could actually hear his voice -- which for me, is a significant part of his appeal. So GD's set was perfect for a broadcast tv show -- but as a stadium/arena show, I found it a little lacking/disappointing.


But honestly, I already knew that going in
-I am never as affected/moved by his live recordings
as I am by his music videos.

(You know how some people singing live give you goosebumps?
That never happens to me with GD, live.)

Also, I'm pretty sure I'm the only person in the whole audience who felt this way!
And I won't be surprised if I get hated on for expressing it.
(who are we kidding, no one reads this blog!)

On Niliria -- I'm super excited to see this kind of collaboration happen -- but I wasn't instantly smitten by the track. I'll wait to evaluate it till I hear the studio recording and dig up the lyrics -- however, Mnet subtitled the song and I'm pretty sure I saw something about broken prophylactics -- which makes me suspect Missy or someone other than GD had a hand in crafting the English parts...such a curious word to end up in a kpop song... But I did enjoy the GD-Missy stage rapport - and the way they hugged at the end, like two people genuinely congratulating each other on surviving/pulling off a small miracle -- which the kinda did. How much time did they have to stage and rehearse this? 48 hours? There was also some cute back-patting as they exited the stage, something that was cut from the M! Countdown broadcast, but can be seen in the fancams.

The curtain call also struck me. GD emerged very last, made his way slowly to the end of the stage, hunched and exhausted, ending up by some of the EXO boys. And then he bowed to the audience. While everyone else was standing around waving, GD bowed repeatedly in all directions - and not in the American Broadway kind of way, but in that respectful Asian way. Then slowly, hunched and exhausted, made his way up stage and paused once more to bow again before exiting into the wings. I found his manners touching. Not that the other kids were being rude or disrespectful, but it was sweet that he made the effort to show that kind of respect to the audience -- in spite of everything his body language was saying.

That's all I got, Internet.

I don't think I'm ever gonna get the kind of live performance out of GD that I would like to see. Especially if he continues his workaholic ways...

Papa YG, if you're reading this, for the love of [insert deity of choice], make the kid take a vacation! Even a sabbatical!

What is the good of releasing all these albums back to back to back (BigBang Alive in early 2012, One of a Kind EP in Oct 2012, MichiGo in Jan 2013, now Coup d'etat in September) if he has to kill himself doing the promotions????

Did I just forget to talk about Missy Elliot's set??? I think I did!!!


Is there more to come from Leaf?  We'll just have to see, won't we.

Read more of Leaf's work at her blog: My Kpop Obsession. You can also find her on Twitter.

Click here and here for more G-Dragon at KCON 2013 action.


Source: Written by Leaf of My Kpop Obsession. Take out with full credit. All fancams and images credited as tagged.  Teen Top pic: officialboyteenfinite via CJ E&M.