Videos of the Day: EXO- MAMA 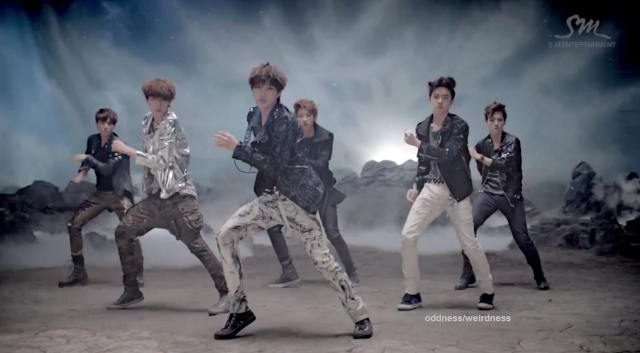 I knew I had to write about these EXO MAMA videos as soon as I saw them.

Skip to around 1:23 in both vids to avoid all the wtf-ery if you like.

A few months ago I wrote about B.A.P.'s Warrior and hinted that I thought SMent sucked because of the way they were trying to hype EXO up with their 50 million teasers, all featuring Kai.  Well, I'm here to say that I'm starting to think I might have to eat my words. I'm not going to lie... so far I'm kind of excited about EXO, mostly EXO-K.  Don't get me wrong:  I know they're flashy and have no substance so far.  Guess what?  I'm not listening to or watching Kpop for substance. It's called pop music for a reason.  I'm here for the great visuals, fun songs, good choreography and eye candy and EXO delivers that in spades.

You can tell SMent really put a lot of thought into EXO, with the way they have such an elaborate back story and how each of them have different Last Airbender-ish powers.  The money they spent on this one group must be into ridiculous sums already.  Just the teasers seem expensive, much less this mv and the one for "History".


I'm still wondering how SM managed to find so many good looking kids with talent... I keep having visions of some shady headhunter type out and about on the streets of Asian countries with a sack and a tranquilizer dart gun, ready to scoop up promising kids to be trainees.  I'm sure some or most of them have had their faces tampered with in some way but still... they're damned cute.

What I like:  A lot of it.  What a well made mv for a rookie group's debut video.  It's pretty darned lol-zy and yet epic at the same time.  The choreography is so well done, crispy and clean ( I think I need a Taemin/Kai dance off, asap!).  I love that combo of hip hop and contemporary dance that they have going on.     They execute it well, though I think EXO-K is the better of the two.

The imagery is so vivid.  I'm just waiting for people to start accusing them and SMent of being part of the Illuminati and being satanists and all that damnnn-you're-crazy-as-hell type of crap.

Let's not forget about the song, now.  Who would've thought you'd be able to mix Gregorian chant and Led Zeppelin-ish rock guitar in a Kpop song and have it sound good?  Definitely not me.  My favorite part??  This:

What I hate:  The backstory... it's gotta go.  Firstly, it makes no sense.  Secondly it's so reminiscent of so many movies, namely Kung Fu Panda.  By the way, is that Dumbledore speaking??  Wtf??

Also, what's up with SMent all of a sudden putting ads in their vids?  Really extra annoying, guys.  I'm assuming Genie paid for most of that video but hey, I could totally be wrong.

Lastly, I did not even know they were chanting in English until I watched the EXO-M video with the subs.  Ha!  What does "shoot anonymous" even mean?  If I've said it once, I've said it a thousand times:  There are tons of English teachers in South Korea, people... Hire one.

So yeah... the real proof will come during their debut perfomance on Inkigayo April 9th, South Korean time.  Will they sing live and blow us away or will they be lacking in charisma and stage presence and all that good stuff?  Will they debut hard and have people talking for days or will they fizzle and die?  I guess we shall see!
EXO EXO-K EXO-M MAMA Video of the day